Using the point-time estimation works for snooker, too.

I did not run this course with the "magic points" in mind. Bug, a 16" Championship dog, had 50 seconds to complete the course. He would tell me what Scout, a 16" Performance dog could do. (At the time, I was going for Top Ten points for her). Both dogs run about the same speed, even though no one believes me. 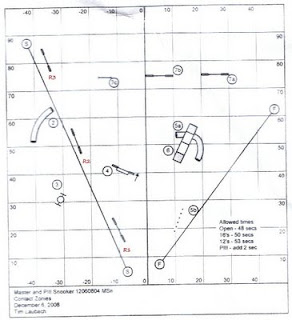 Note that amount of hauling butt you need to do to cross the finish line. If Bug crossed the finish line before the timer sounded, then I had more time to get more points. It didn't matter because he took first, SuperQ and his Snooker Master title.

I don't think we could have successfully completed the #7 with this opening.

Conclusion
In 50 seconds, I expect to get 25 magic points with Scout. The course I happened to choose, without any analysis, worked. She crossed the finish line at 53.41 seconds. Scout took second and SuperQ'd.

And, in case you're wondering, Scout did make the 2008 Performance Top Ten for Snooker.

Posted by AgilityEngineer at 5:01 AM