This jumpers from Dave Grubel at Contact Point 02/28/09 was fast and fun, utilizing a straight tunnel, also known as a puppy cannon. 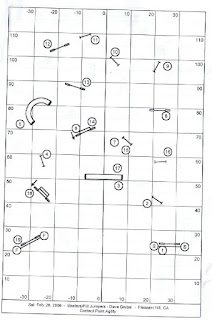 I scribed Masters, so I got to watch where things went wrong.

A lead out between 2 & 3 was popular. However if the handler was not positioned well enough for the dog to think he could land safely, bar #2 dropped. In lieu of the lead out, some handled with a rear cross at #4.

There was a lot of chatter about the desire to get a front cross in between #14 and #15. I can attest, it was difficult. I had to put on the afterburners and not admire my dog. The reason there was so much talk about this front cross was getting to #17 without taking the off-course #2 jump.

#18 was a triple. Some that handled that as a rear cross had dropped bars. 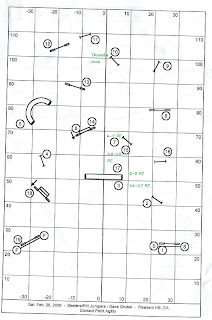 Posted by AgilityEngineer at 6:01 AM