Some Things Were Meant to Be, I guess

I've had handlers fuss at me for going for a Super Q when I don't need one. Sometimes I go for them because the current leaders huff and puff over my shoulder at the score table. Sometimes I get them on accident. In any case, I told just about everyone in this class what my course was going to be.

This is the Masters Snooker course by Jim Hibbard, at Agility Club of San Diego in June 2009. 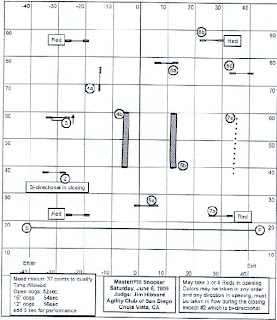 What is most noticeable is that two of the reds are also part of a numbered combo. This requires the handler to have to remember to get that jump twice. Trust me, I forgot this when Bug back-jumped one of these.

Anyhow, when I looked at this course map, I liked the flow into the closing from either the #4 or #5 tunnel/jump combo. The other thing I noticed was how vertical the course was. In order the get all four reds with minimum running, the key was to ping-pong the course. For example, an opening of 7 to 6 means you are running without taking obstacles about the width of the ring. That's wasted time. However, a 7 to 5 looks pretty nice, that is, if you want to weave.

I ran both of my dog: the veteran and the baby. I don't want the baby to find back-jumping acceptable. (I'll back-to-back jump the tire in gamblers with the veteran). My course was a simple ping-pong.

The reds are in the corners of the map. I'll address them by their location:
BR - Bottom Right
BL - Bottom Left
TR - Top Right
TL - Top Left

I chose two 5's and two 4's. I knew I had to be careful with the #5 straight tunnel (puppy cannon) because it may lead to an off-course. My alternative course was three 5's and a four. I know that this course is not a whole passel of points. I usually try to stick with fives, sixes, and sevens. However, in this snooker, the dog would have to do a lot of running without the reward of an obstacle.

Posted by AgilityEngineer at 4:58 AM