Time to move on

I've been training at the same place for years. I've been there longer than any other agility student, and all the agility instructors. I do not expect special treatment. I do, however, expect to be treated the same as the others.

I am not returning to classes with Boo, as I feel there is inadequate instruction. This is a beginner level class, and feel that the class shouldn't be "follow the numbers" and "That's nice." One should get instruction, like "Try this."

My class with Bug has turned interesting, as my instructor is no longer speaking to me. Other dog/handler teams last night received, "Good Job!"s.

My older dog, Scout, earned her PDCH-Platinum a few weekends ago. There is usually a big celebration in class, even though she no longer attends. Zilch.

I have a theory on WHY this is going on, but can't substantiate it yet. If it is true, it's most pathetic that a person takes directives from someone else about to whom he/she may speak and behave.

Posted by AgilityEngineer at 6:03 AM 3 comments

Where are the USDAA small dogs? Part 2

The rules at USDAA trials are rather loose, like no requirement to have a dog on a leash, and some vague "sportsmanlike conduct". AKC, well, there's long list in their code of conduct. I can see how this code is appealing to the small dog handlers.

There appears to be an "us against them" mentality between the small dog handlers and the larger dog handlers. Just because your dog is bred to give eye, bite, herd, give chase, or whatever doesn't mean the behavior is acceptable towards other creatures.

Someone posted a picture of a dog gripping a cow on Facebook, very pleased with her dog's (a relative of the pictured dog) mouthiness. Only thing about it is... this dog does NOT participate in herding - it's an agility dog.

Bragging about this got my panties in a bunch. Why? Bug has been a victim of this dog's mouth. Twice. And, the handler NEVER apologized.

Scout just doesn't like most other dogs. I monitor everything around her, as I don't want her to have the opportunity to react. I give warnings. "My dog doesn't like other dogs." I apologize if I haven't been vigilant. Upon hearing Scout's story during an award presentation, most handlers were surprised that she is reactive. "I never knew... you manage it well".

Here are some of the things that my dogs have been subjected to:

Oh, and don't think I'm on a tear about border collie owners. Some small dog owners can be just as guilty!

Posted by AgilityEngineer at 6:41 AM 3 comments

Where are the USDAA small dogs?

I have three (rescue) dogs:

Boo is a Chihuahua/Something mix, about 10" and 7#. He is in training. 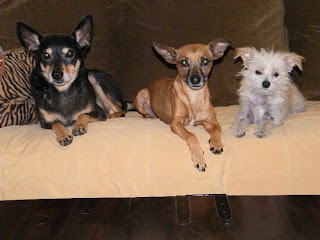 Boo has been special needs since the day I brought him home. He was tranquilized for his neuter surgery, arrived dopey, and remained so for a week. He also refused to eat. And do his business outside. He's lucky that he's adorable.I know there is the argument about the USDAA jump heights, as the little dogs would either jumpe 12"/16" Championship or 8"/12" Performance. This is part of the issue.

I had trouble with Bug popping weave poles. No one could tell me why, that is, until I came across a small dog person. "You're too close to him. He sees feet, and thinks you will step on him."
Therein lies the problem: Training the small dog in a world of BC-only instruction.
USDAA
Technical courses with tight course times, the IHC flair, the long distance in gamblers.

Perhaps AKC appears to be a more viable option for the small dog handlers because the handler has difficulty applying large dog training into their small dog world.

This really bothers me, as I am having trouble training Boo, especially with fear of the teeter, and subsequently, the dogwalk. My class is a waste of both time and money. Oh, and the other fun thing about a small dog: other dogs want to eat them AND the other dog owner doesn't apologize.

Boo is a little fella living in a world of giants. I know he has it in him, but I need help unleashing his inner beast.

Posted by AgilityEngineer at 8:24 PM 3 comments