More Reasons to Stay Away from AKC

I ended up a member of a kennel club because of BarnHunt.  Yes, rats!  I kinda had to join to be trial chair at an agility event.  These are a nice group of people, and I am okay with helping them, though still not willing to give AKC money.

The chairperson position for a bench hearing was dumped on me, as the club is small, and some members were too familiar with the situation.  So the best person to chair this is the one most apathetic - me!

AKC has a 30-page document of bullshit proceedings for this crap.  In contrast, USDAA has about two pages of general instructions and some checkboxes.  You can guess which one is easier to follow.

Why does AKC make the club do its bidding?  That's the answer I want to know.  30 pages of what is essentially a court procedure where the club is the judge, jury and executioner.  One misstep and BAM!  It doesn't matter.

It should be the licensing organization's responsibility to address the evidence and penalize appropriately.  The club should gather evidence.  Period.

So this hearing was against a woman who reminds me of Dolores Umbridge, the Defense Against the Dark Arts professor introduced in Harry Potter and the Order of the Phoenix.  So I will call her that... Dolores Umbridge.  This lady also has all the charm, personality and temperament of her namesake. 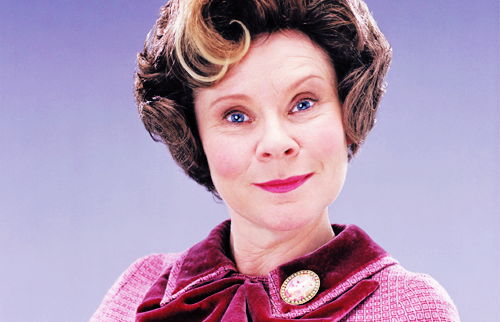 Anyhow, here's my cover letter about the hearing, also forwarded to all AKC board members, legal, etc.  Links to evidence are missing, as are names.

I have competed in agility since 2002, and have participated in agility event committees since 2009.  I compete solely in another agility venue, and have experience in a variety of show positions, including disciplinary action committees.  I quit AKC agility in 2010, shortly after the Canine Partners inception.

My dogs were not welcome at the 2011 Fiesta Cluster agility, and neither Scottsdale Dog Fanciers Association (SDFA) nor Superstition Kennel Club (SKC) could honor me with a reason why.  I led a social media campaign against agility at the Fiesta Cluster, and my friends who normally would enter did not, nor have they returned.  When I relay my experiences, AKC potentially loses active competitors and future ones.

Factors why I do not support AKC performance events:

* Competitor behavior towards mixed breeds, such as asking, "What is THAT?"
* Breed Clubs wanting support/donations, yet denying entry to their shows
* Gate stewards being nasty about the description "canine partner"
* Gate stewards willing to 10-dog separate handlers, so long as the dogs are not mixed breeds
* Sneering comments from breed people about my purebred Australian Kelpie "Dobie mix"

I run two dogs in agility, and this represents money I spend elsewhere.  It really is a shame because the lure course clubs have less contemptuous members and competitors.

I am a new member of SKC, meeting club members through BarnHunt.  When I first attended one of SKC's practices, I was openly honest with them about who I was and my campaign against the 2011 Fiesta Cluster.  The members assured me that "things have changed" and that they welcomed all dogs.

I had the misfortune of have the chairperson position dumped on me for a bench hearing against Dolores Umbridge.  I felt from the moment the hearing began, that the AKC organization either did not take this hearing seriously or do not care that TWO of their judges are disrespectful.

Firstly, AKC Person 1 arranged the conference call and from all indications, either he or AKC Person 2 would virtually attend.  Neither did.  We wasted over thirty minutes trying to get either to call and participate.  I was in and out of the conference room for better cell reception.  Mrs. Umbridge chortled, rolled her eyes and kept sighing as we struggled with the lack of support from AKC.  Furthermore, Mrs. Umbridge alluded to her knowledge that AKC Person 1 was retiring and that she has been in frequent contact with AKC Person 2. This gives the appearance that AKC has already decided the outcome of this hearing.  Mrs. Umbridge refused to sign the hearing form.  Yes, there are mistakes, as I took over as chairperson from  Someone Else
AKC makes money when clubs make money.  It is a simple business principle: have a successful event and grow.  A successful event includes more than competitor entry fees - it includes vendors and spectators.  An event like the Fiesta Cluster should be a celebration of dogs and a vehicle to get spectators interested in AKC events and purebred, AKC-registered dogs.

When AKC gives the appearance of a "Good Ol' Boy" network, reminiscent of the 1950's South, by protecting their own, it makes people like ME, a non-AKC participant, who can participate, choose otherwise. People like ME represent your untapped market that will continue untapped until AKC chooses to change and treat all with respect.

It is none of my business how AKC chooses to run theirs... you can choose to be proactive, progressive and welcoming to all, or remain stuck in a bygone era.

While the pomp and circumstance regarding hearings appears noble, it still allows and condones ill behavior by those associated with AKC and those participating in AKC events because of convoluted, archaic procedure.  The club's responsibility should be the event.  The 30-page "Dealing with Misconduct" document can be narrowed to two pages of mostly checkboxes, making this process easier for all those involved, including AKC.  The licensing organization, AKC, should ultimately address the reported behavior.

I respectfully ask that you take this bench hearing and evidence presented seriously.

Posted by AgilityEngineer at 6:31 AM 2 comments