A March Weekend with Scott Chamberlain

Maybe I should preface this by saying that I am biased. I like Scott Chamberlain's courses. They are fair, have good challenges, and require handler thought.

Saturday Snooker
I got a little help from my friend, Maureen. This course was 3 or 4 reds, but a helluva lot of distance to cover. A nice flow is 1-3 (or 4), 1-5, 1-7, 1-7 to the closing. 7a and b were actually more awkward to handle in reality than on paper. Some people went for 4 sevens, but did not complete the closing. Fortunately the 7 combo did not have any special rules in the opening.

Maureen suggested 3 sevens for Scout, and that's what we did. 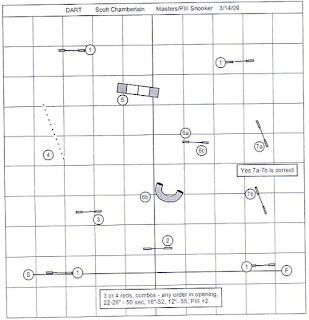 The time allowed was 52 seconds. That's about 26 magic points for Scout. The closing is worth about 13 for her (3 on the weaves, and extra for handling the seven). I can have at most 13 magic points in the opening.

I started with the #1 at the lower left of the page, ran by #2 and into 7b to 7a. This is about 5 magic points. I directed Scout to the #1 at the top right, and back through the 7 combo. About 4 magic points. The last red was the obvious - the bottom right. The last 7 went from A to B into the closing. This was about 4 magic points. All these values take into account some travel time without obstacles. Opening Magic Points: 13. Finish Time: 51.89 seconds. Worked. Could I have done all four reds? Maybe, but my initial calculation with four reds said no.

Sunday Gamblers
Sometimes you get a little help from your friends. Like when you know how to make your gamble opening, but just don't like it. Here's the course map: 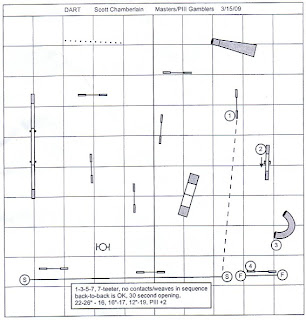 To paraphrase Christopher Walken, what this course needs is more tunnel. I like tunnels because they are fast and cheap. The rules included no contact-to-contact and no contact-to-weaves, or weaves-to-contact, back-to-back okay.

Fortunately I have a friend in California that likes to discuss these strategic things with me. Yay! We discussed taking the tire twice, and that it was best NOT to teach the dog that it is okay to back jump. In the end, for my opening, she and I decided to take the tire forward and backward. (Tire is cheap! That's a quick 6 points!) I just made sure Scout could land safely and turn and do it again. If I ever do something that feels as demoralizing as that, I like it best at the beginning of the sequence, before the dog is running full steam. That's why I will not do that teeter back-to-back. Demoralizing.

Here's what I did: 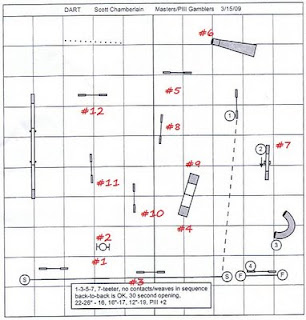 You might wonder why I chose to end 35 feet from the gamble line. In one of the openings Maureen and I came up with, my last obstacle would be the A-Frame. The speed and angle to the #1 gamble jump would be lacking and awkward. I chose to have a very straight, all out run to the #1. It worked well. As Scout completed the teeter, I positioned myself parallel to the correct tunnel entrance. As she approached between the correct tunnel entrance and me, I gave her a "left tunnel" command. When she took the tunnel, I was running to the #4 jump. Got it, and took third. (Maureen and her dog took first!) 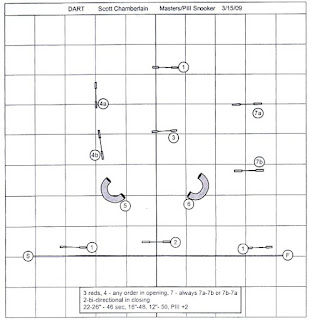 Maureen and I co-conspired on this one, even though our dogs are in the same jump height. The special rule on this one (thanks for not disappointing me, Scott!) was that the #7 combo had to be taken in direction, but either jump could be first. In other words, from the inside out. A nice course was all 6's, with a potential off-course at the #3 jump. A few people with blazing dogs attempted three 7's. Maureen and I concluded that 6-7-7 was the way to go, and that there was enough time. I entered both Bug and Scout, and both had 48 seconds.

Bug is a young dog who already has his Snooker Master title. I wanted this to be fun for him. I did all 6's. Instead of front crossing the first #6 to get the red at the top of the page, I met him outside the tunnel and essentially blocked his view of the #3 jump. I wrapped him around the right of the next red, and all he saw was tunnel. I ran the outside of the tunnel to pick him up for the last red (bottom right). I just had to be careful of all those tempting tunnel entrances to get him to the #2, and then ping-ponged out to #3. #3 to #4 was a change in focus. If the handler was not paying attention, the dog leapt from #3 to the off-course #1 in the closing. Another popular off-course was taking #4b instead of #4a. Most handlers front crossed between #4b and #5 to the correct tunnel entrance. #5 to #6 was fast and fun. Then came the tricky part: pick up at that tunnel into #7a. I made a front cross at the tunnel exit, but pulled Bug too much. The whistle blew for a runout. Still a qualifying run. Good boy!

Scout is collecting Q's, but I was feeling rather feisty. I went for the course that Maureen and I planned. The closing, in magic points, is about 9.5, which includes 0.5 for #2-#3 and 0.5 for the handling/distance between #6 and #7a.

What I failed to realize when I walked this was the harsh angle from #7b to the #2. Most refusals occurred at the #2. I really had to work that approach better. After that, it was smooth sailing, except Scout didn't miss #7a like Bug did. She completed the course in a little over 44 seconds, and took first place.

Posted by AgilityEngineer at 6:09 PM