Flow is Helpful. Somtimes, It Wins. 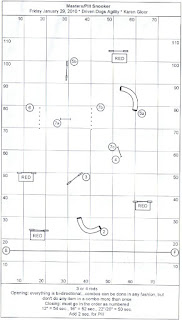 It's four reds (more strategic), with two combos, #5 and #7. My older dog, Scout, will either retire or semi-retire this year. I am no longer going for Top Ten, which she has been in for the past two years. My little guy, Bug, typically gets the same course as his sister because it's easiest one me, though I have been known to run different courses. This time, I chose the same course.

I considered starting out with 1-6 and 1-6. While time was on my side (50-something seconds for jumpers with weaves), I chose something nice for my dogs. It was not a high-point course.

Most people bit it in the opening, handling the #7 combo. When I said that the combo opened to tunnels, the dogs took the tunnel. Heck, Bug took the tunnel in the closing.

Posted by AgilityEngineer at 4:33 AM